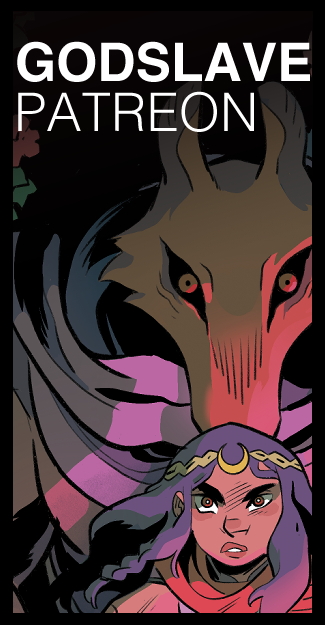 His rise to glory

This month, Library Friday took a look into everyone’s favourite crocodile and symbol of pharaonic power: Sobek! Though he might not be as popular as anyone in the Osirian family, his worship was widespread and lasted from the Old Kingdom all the way to the Roman Period! From the humble marshes to statues with pharaohs and having the Greeks name a town for him, Library Friday will be covering Sobek’s meteoric rise to fame. But first it has to be said: This post is brought to you by

The big reason this Library Friday is here is because I was able to afford the time to spend at the library compiling research and putting together this report. And that wouldn’t have been possible without the kindness of the Godslave patrons. Thank you so much for your support! It’s because of your kindness that I’m able to put freelance work aside and give Godslave and Library Friday the love it deserves.

As many people know him, Sobek commands domain over many things the Ancient Egyptians held precious. God of the Nile (said to have come from his sweat), fertility (both greenery and procreative) and kingship. But back in the Old Kingdom, when Sobek made his debut in religious texts, Sobek was only known as ‘the Raging one’. 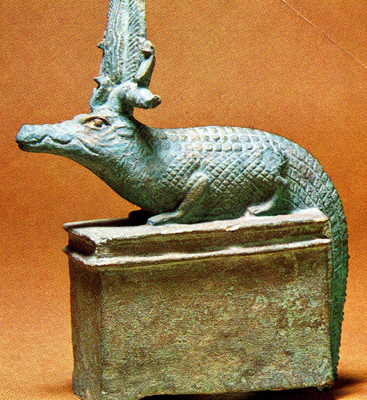 Crocodiles were a real, tangible threat for Egyptian people in primitive times. When the canals had dried up, crocodiles walked through fields and could snatch people at anytime.
‘The Egyptians came to regard this animal as a personification of the powers of evil and death…’ (Who’s Who in Egyptian Mythology, Anthony S. Mercatante)

As many cultures like to do, the Egyptians turned their fear of crocodiles into prayers. Worship of Sobek spread to wherever the beasts tended to nest, as a way to appease them. They started out in mainly marshes and swamps. Then, around the 12th Dynasty (moving into the Middle Kingdom), this fear of crocodiles becomes admiration. The power and prowess of the crocodile becomes a symbol of the power of the pharaohs. Sobek becomes the literal god of Kings. Pharaohs begin naming themselves after Sobek, such as Sobekneferu (Beautiful of Sobek) and Sobekhotep (Sobek the Satisfied). 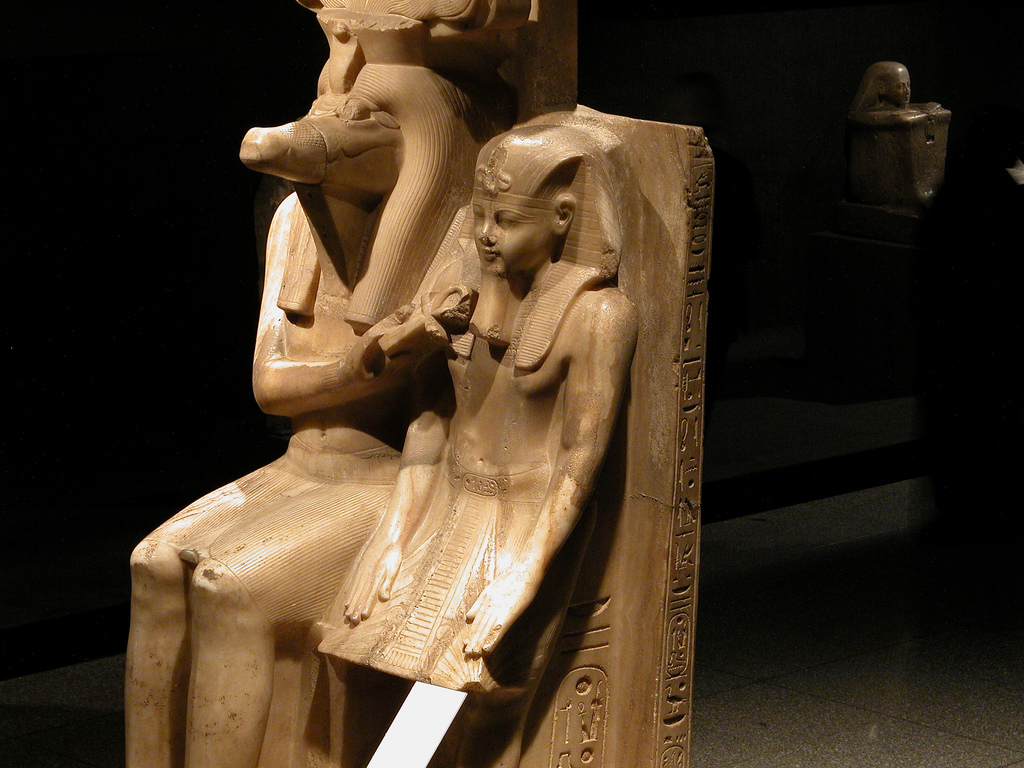 It’s around here that hymns emerge about Sobek. Sobek… and the Osirian family. Cults insert him into the Osirian myth, manifesting in good and evil. How he, in his crocodile form, drags Osiris’ body out of the Nile to safety. How, when Isis is in hiding baby Horus, she carefully constructs a boat of papyrus reeds to protect themselves from crocodiles. There's no greater achievement for a god back then. Getting in with the Osirian cults seals your place in history at this point.

In the stories Sobek represents the duality of both benevolent and destructive. Epithets like the Raging One and Lord of Bakhu, a mythical mountain where he’s built a temple made of carnelian. The crocodile goes from snatching people from fields to:
‘He who takes women from their husbands whenever he wishes according to his desires’ (The Complete Gods and Goddesses of Ancient Egypt, Richard Wilkinson)

But Sobek doesn’t reach peak popularity until the New Kingdom, around the 18th Dynasty. A common practice among Egypt’s ancient cults was something called Syncretism. Syncretism is when you combine a local deity with a greater one, affording that local god more power. We’ve actually seen it before with Horus, when he becomes Re-Horakhety. In the New Kingdom, Sobek takes the epithet Sobek-Re. With this assimilation, Sobek becomes a primordial and creator deity.

The Greeks loved Sobek. They called him ‘Suchos’ and associated him with their own God, Helios. They even name his main cultural worship centre Crocodilopolis; known to the Ancient Egyptians as Shedet, and to modern day Egyptians as El-Faiyum.

Sobek’s temples and worship are spread out all across Egypt, soon reaching Ombos, now modern day Kom-Ombo. This becomes another major cultural worship centre. It used to belong to someone else, but after falling out of favour with the Osirian cults, the temples were taken and repurposed for Sobek’s cult to move in (as long as they shared with Horus). The most prominent temples would have pools of water, purely for housing sacred crocodiles. When the crocodiles died, they were honoured with a mummified burial. 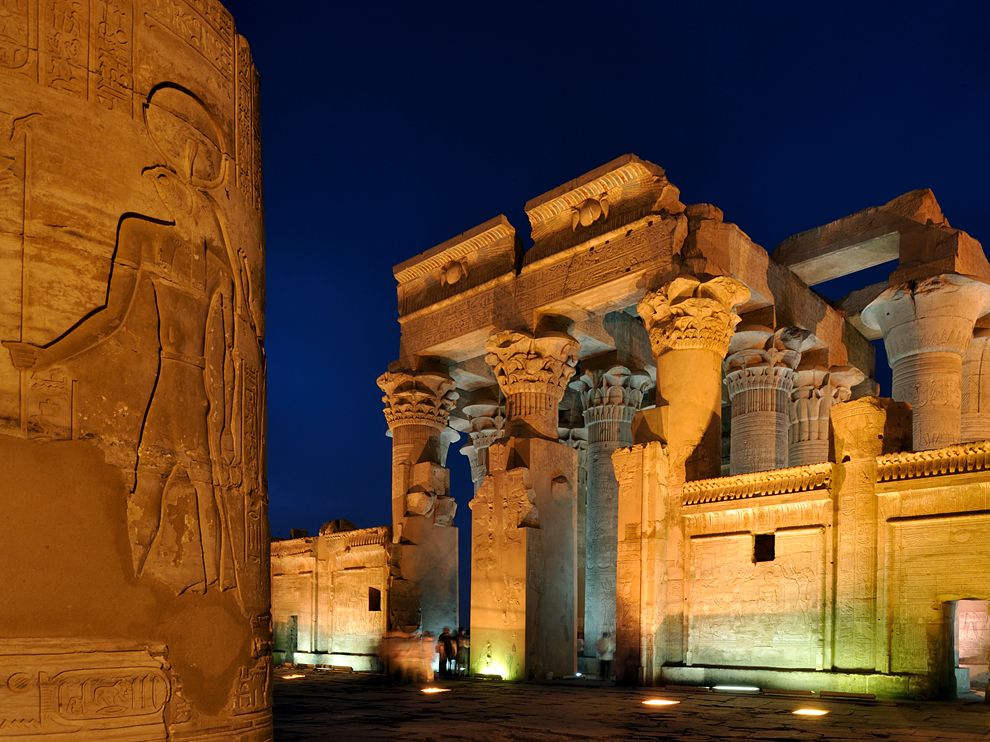 Like a lot of the gods from Ancient Egypt, it's hard to pin down his specific bloodline. Some sources say his father was Set, another says it's a minor god named Senuy. It's said his mother was Neith, and as far as consorts there are a few to pick from depending on which area of worship you ask. Some say Hathor, or Renenutet or another named Heqet. The only offspring mentioned is Knum; a god of water and fertility (sounds familiar). But also the potter's wheel, making him a creator god like his possible father.

Sobek's history of worship may have had a lack lustre start in the swamps of Ancient Egypt, but from watching over kings to a starring role in the Osirian myth- the fact that Sobek's name has survived this long clearly shows the reach his cults had. His name might not be as well known as Osiris or Ra, but there's a fondness for the half-man, half-crocodile God in popular media. Honestly, google image search the name Sobek. There are video games, books, cartoons, comics. His image has become almost as iconic for Egyptian Mythology as Ra.

Thanks you again to the wonderful Godslave Patrons that made this post possible! If you're interested in becoming a Godslave Patron, it's only 2 dollars a month and you have access to a couple years of Godslave conceptual work, and peeks into my freelance and personal projects! Visit the link HERE for more information!